We’ve travelled to many children’s museums around the country, and our sons favorite exhibits are always the ones where fans or pneumatic tube systems shoot balls or scarves  through tubes, like the “scarf poof” at Kidsquest, the Air-mazing Laboratory at Imagine in Everett,  and this one at the Tacoma children’s museum: 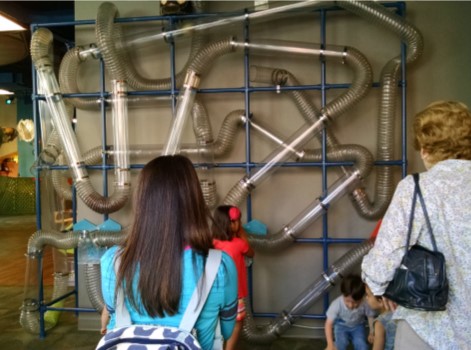 We started with the fan. Exploratorium mentioned that they had made a wind tube using a squirrel cage fan. I researched those, but they need wiring skills I don’t have. So, we chose a utility fan, specifically the Lasko Blower.

(You could probably use a regular fan, but it wouldn’t create nearly as strong a wind.) This video shows what the fan does with a scarf on its lowest setting – all the other videos have the fan on the highest setting. (In class, I started the kids with just the fan and some scarves to blow up into the air, and even that simple game elicited gleeful giggles.)

The challenge was: how do we connect this round hose to the oblong opening on the fan?

We built a couple of boxes from cardboard and cut door flaps in them where you can push a scarf in. [Note: you can find a pattern for these boxes in a more recent post on my other blog.] These were more fun for kids, because it focuses the air, so scarves shoot a little higher.

And check out what happens when we sent a little plastic “bowling ball” through the door.

We mounted a poster tube through the box. You could stuff scarves into a tube, hold your hand over one end, then let go, and they’d shoot into the air. You could shoot a lightweight ball too – like a cannon ball.

Then we assembled it. Put the cardboard box over the fan, mounted the hose on the box, and we were good to go. When I tested this at home, with just one child, it worked great. We had a fabulous time with it, shooting scarves into the air, shooting balls so they rolled across the floor for the dog to chase, shooting balls into a box for improvised “golf” game. Tons of fun for both of us.

But, then my husband tested it in a class full of kids. The first problem was that it kept falling apart. The fan tilts in its base, and if you tilt it too far, it pushes the cardboard box right off. (I may have forgotten to warn my husband about this issue… )  When kids put their hands in  and pulled them out quickly, that pulled the cardboard box off quickly. Just the weight of the hose could pull the box off. So, there was a lot of work involved in just keeping it together, and the kids weren’t that excited by the results even when it worked.

So, before the next time we’d use it in class, we did some tinkering. We used a ratchet strap to hold the hose onto the box and the box onto the fan. We turned it so the hose fed off the other side of the fan, over the handle, which helped to stabilize the box. This solved the falling apart problem.

We had discovered that kids like it better when the scarves shoot vertically up into the air instead of shooting out horizontally, so we wove the hose through the legs of a stool to get that upward angle.

Check out the video at the top of this post to see the scarf cannon in action.

We took it back to class, and this time, we had a hit on our hands! Lots of kids loved feeding through scarves, and balls.. We discovered that kids liked it even better when we set the stool up on top of the cubbies, so the scarves were shooting out from 4′ up in the air. The three biggest fans of this toy were a team of a 5 year old boy and a 4 year old boy, and a 2.3 year old girl. They discovered that if you sent through a balloon that was just the right size, it makes a really funny rumbly noise. The little girl was just as successful at using this invention as the older kids. She clearly learned from them. The boys had been having fun catching the scarves in a bin as they floated down toward the ground. When they walked away for awhile, she picked up the bin and tried to catch the scarves.

My next step is to try to re-create this thing we saw at a bounce house place… it was a batting cage, where a ball floated above a cone and the kids could hit it with a nerf bat. Right now, with a 4″ wide stream of air, my scarf cannon holds the ball right above the tube outlet. But I’m thinking if I got a traffic cone type shape that really focused the air, we might get enough lift to do this…

In our Inventors class, we are encouraging kids to tinker, and try things they’ve never done before. We tell them to build something, test it, re-build it, and so on. I am intentionally doing the same thing as I design activities for the class. Experimenting, failing, and trying again. This scarf cannon is still a work in progress, but it’s definitely a fun exploration!

You can also check out my experiments with building a wind tube, a marble run, and a water wall.

Since I wrote this post in 2015, we’ve updated our design. To find the most recent design and see more videos of our scarf cannon in action, check out this post on my other blog (Inventors of Tomorrow) about Fun with a Fan.

12 thoughts on “Building a Scarf Cannon”