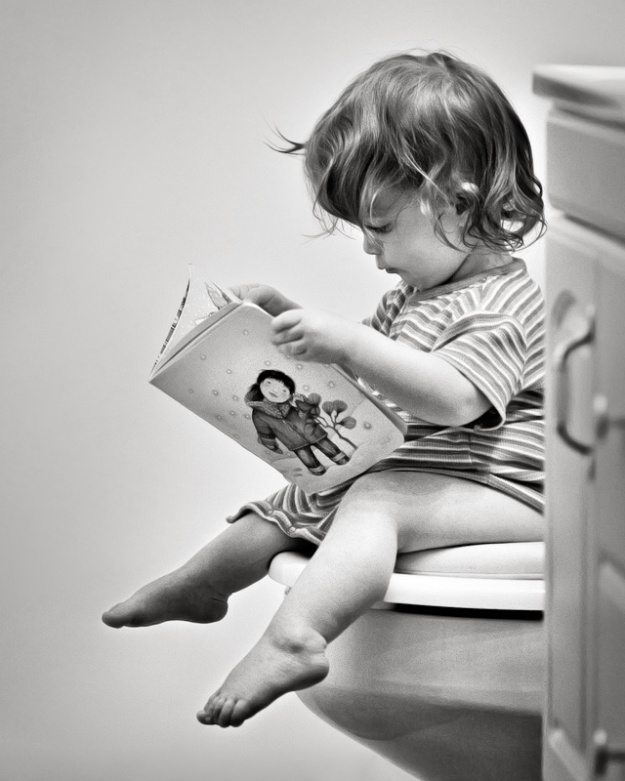 I have a fully detailed post on the potty training process, but if you prefer the short 1-pager summary, click on the image below, or view/print the Potty Training Overview. 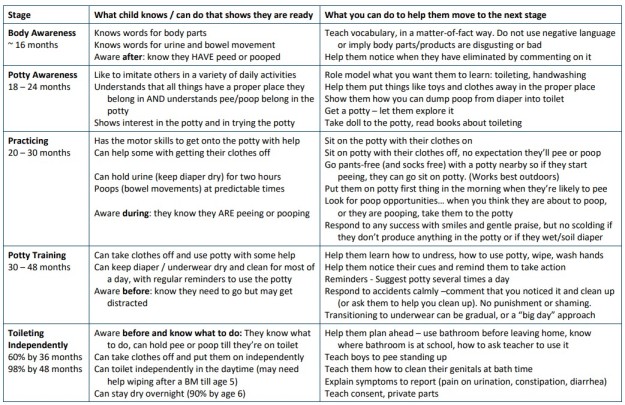 Read the columns titled: Stage and “What child knows…”   Find the stage for which your child can consistently do all the things described in that second column. That tells you what your child’s developmental stage is. Then look at the third column for what you can do to help them progress to the next stage.

I hesitated to give any ages for any stage, because the age at which children reach each stage can range a great deal. It depends on gender, the child’s temperament, parent’s temperament, cultural expectations, and other external influences. Focus more on the signs that they are ready, and less on age! 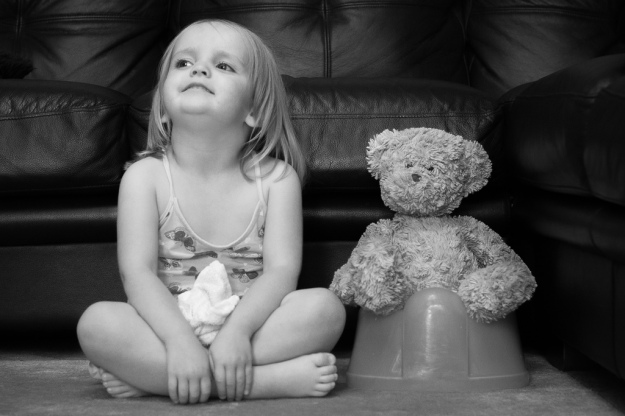 During the potty training process, about 20% of children go through a phase of refusing to use the potty at all, or refusing to poop in the potty. For some the phase lasts a month or so. For others it can be a year. This is called “Toilet Refusal for Stool Only.” One scenario is a child that asks for a diaper at nap time or bed time, go in their room and poop in the diaper, and then asked to be changed. Clearly, they have bowel control, and are making a very conscious choice about when and where to poop. It’s just not the choice you wish they were making.

An important note here: I’m not talking about “stool holding” here. That’s a child who refuses to poop at all, anytime, anywhere. That’s a different issue and it’s a medical issue that can cause constipation and bowel impaction and requires different treatment (see here).

I’m talking about kids who have regular, normal poop once or twice a day, just not in the potty. And I’m especially talking about a child who you know is developmentally capable of pooping in the potty because they’ve done it in the past… they’re just not doing it anymore.

So why does a child do this?

There are lots of proposed reasons. Most won’t make sense to you as an adult, but they may be what your child is feeling.

Which one applies to your child? You may be able to guess, or if your child is old enough to talk about it, then ask them in a really non-judgmental open-ended way. “I notice that you always poop in your diaper and you won’t try pooping in the potty. Why is that – tell me more.” They may be able to tell you.

How NOT to respond…

Don’t show a lot of emotion about it. Be very matter-of-fact. “It looks like you pooped in your diaper again. Remember, I’d like you to use the potty. Let’s go get you changed.” Be bland and boring during the diaper change.

How do you get a child to poop in the potty?

It’s hard to make someone poop on command! And no, threats don’t work either, because when we’re scared, our sphincter muscles tighten up and it gets harder to poop.

What can you do? Here are some suggestions – don’t feel like you have to try them all. Some will feel right for you and your family’s situation. Others won’t.

Your child may have some short-term issues with constipation. You should expect to see at least one stool a day, about the size of a small banana, and fairly soft. If your child is only passing small hard stools that hurt to poop, that’s constipation. Make sure they drink plenty of water, eat plenty of high fiber foods, and get lots of physical activity to help making bowel movements regular and easy to pass. If constipation persists or recurs often, check in with your child’s doctor.