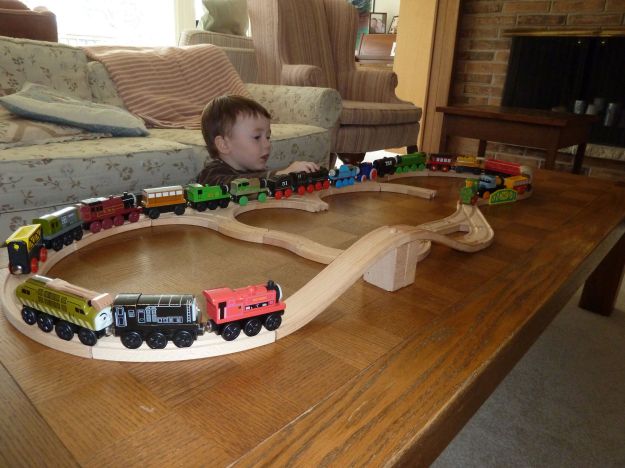 All young children love repeating the same thing over and over. It gives them a great sense of mastery over their world when they know what to expect and they know what is expected of them. This is true of ALL children. But especially of my little boy.

With his big sisters, I was all about variety in their activities, and diverse experiences, and exposing them to as many things as possible. Sure, we had some books we read again and again, and some favorite places we visited often, but I definitely actively sought out new adventures for them, both for their sake, and – frankly – because I was young and impatient and easily bored of the ‘same old thing.’

But my boy demands routine. He insists on the familiar. He revels in repetition.

He dives deep into things with a devoted passion. When he had just turned two, he fell in love with Cat in the Hat, and we spent 3 months reading it over and over.We all had it memorized, and we were all grateful that there are so many of us in his daily life that can read to him. (Between me, my husband, the grandparents, and the sisters, he has 6 dedicated readers to go to. So each of us only had to read the book about 100 times, rather than the 600 repetitions I would have had to read without my village of support.)

After that, it was about 6 months of trains. The Thomas the Tank Engine videos, train books, toy trains and tracks, the trips on real steam engines, the sitting by tracks and watching trains pass by. Now, it’s not that trains were the ONLY thing we played with. On a regular basis, I “made him” do other things, and there were plenty of trips to the playground and the library and concerts and books about other topics… But definitely trains dominated. Again, it helped that his abuelo (grandpa) loves trains and was quite happy to play along.

Then it was 5 or so months of the alphabet. Listening to YouTube ABC songs in the car everywhere we drove, playing all the ABC apps that exist for the Kindle Fire, putting together letter puzzles, singing the ABCs, playing the “I’m thinking of an animal that starts with the letter R” game.

Now we’re five months into the planets. The books, the videos, the planetarium visits…  I’ve got the three year old who is sliding down the slide shouting “Mercury, Venus, Earth, Mars…” and telling the other kids “the sun is the center of our solar system. The planets orbit around it. It takes one year for the Earth to orbit the sun” and so on. And everywhere we go he finds sets of nine objects to line up to be the planets. Whether it’s balls, rocks, sea shells, sugar packets at a restaurant… the smallest items are Mercury and Pluto, the biggest is Jupiter, etc.

Sometimes this repetition / focus drives his sister crazy. She’s 17 and thinks the world is more interesting with variety.

It doesn’t really drive me crazy though.

Most of the time.

Partially because I’m older and more patient. Partially because of all the other adults (and adult-like older siblings) who help support his passions – if it was only me doing all this with him, I’d have worn out by now. Partially because I can see how much he learns by doing it. We know from neuroscience that children learn / build connections in their brain through repetition, especially in a setting where they feel happy and safe. My boy learned to read before he was 3. He can memorize books, songs, and videos… the other day he was quoting a Bill Nye the Science guy video word for word… He’s also on track for learning all the things he should be learning at 3 – how to hold a marker (and draw planets), how to sort things by categories (rocky planets, gas giants, dwarf planets), how to make things of clay (yep, planets), how to carry a tune (yes, singing songs about planets) – and lots more skills we expect at this age. We’ve also talked about things I didn’t expect to cover at this age – like states of matter.

And really, the biggest reason I’m willing to repeat things over and over is simply that it makes him happy. The joy and satisfaction he finds in a deep mastery of a topic is pretty hard to resist.