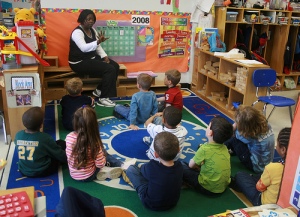 How do you do it?

Family Language at Home (also called minority language at home): family members all speak their family language. The child will learn the community language later, as she goes out into the community, attending preschool, kindergarten and onward.

Foreign Language Child-Care: some families hire an au pair or nanny who speaks a different language from the family, others place the child in a child care setting where another language is spoken.

Exposure to Other Languages: some families dabble in languages, perhaps teaching the child how to count or name animals in another language. They may read books, watch videos, or sing songs in the other language, or use it in occasional conversation. They may seek out language based playgroups.

The key components that affect whether a child learns a language are exposure and need. Are they exposed to the language in multiple ways by multiple speakers? The greater the exposure to a language, the greater their chance of learning it. Do they need to use the language to interact with people they care about and to get what they want? This will increase the chance they will learn it

So, if you’re just offering occasional exposure to other languages, where they don’t need to use the language in return (for example, reading books or watching videos) they will likely have only a basic familiarity with the sounds of the language and the ability to say a few words.

If a child is exposed to several hours of engaged interaction each week, where they are motivated to communicate with the speaker, like at child care or via one-on-one care by a nanny or an extended family member, they may learn to carry on basic conversations.

Some children observe closely to figure out what’s the “important language” and focus on that. For example, if they notice that Grandma speaks Spanish to them most of the time, but speaks to other people in English, they realize they can speak English with her and get the interaction they want, so there’s not a lot of need for them to learn to speak Spanish (though they may understand it well.)

Is it a good idea to start a second language early, or is it better to delay?

Parents worry that learning two languages at once (simultaneous bilingualism) will be confusing. They wonder if it’s better to wait till a child knows one language well before starting the next (sequential). Most experts say it’s fine to start from birth – it is as if the child has two “native languages.”

Babies are born with billions of neurons (brain cells). They spend the first few years of life building trillions of synapses (connections) between those cells. For language especially, these first few years are the most “sensitive period” in their lives when they are primed to learn language. At 6 months, human babies are able to differentiate between any sounds that human beings make.

But as children age, they begin to “prune” some of the synapses they’ve built. Connections that are important get reinforced, but things which they aren’t using in everyday life may get cut. So, by 11 months, a mono-lingual baby no longer hears differences that aren’t important in his family’s language. For example, a Japanese child can no longer hear the difference between ra and la, because it’s irrelevant in the Japanese language.

If a child is raised bilingual, it extends the learning and pruning period: at 11 months they can still distinguish between all sounds. By 14 months, they recognize all the sounds that are important to both their languages, but don’t distinguish other sounds.

Are there disadvantages to learning two languages early on?

If only the family language is spoken at home, and the child has minimal exposure to the community language before starting preschool or school, it’s not unusual for her to struggle a little in the first few months of school, but usually within 6 – 9 months or so, she catches up to the native speakers.

If the family speaks multiple languages, the child will of course sometimes make mistakes, like asking “Where you are?” instead of “where are you?” or calling something by the wrong name. This is not much different than the mistakes a mono-lingual child makes, like calling a cow a sheep, or saying “I have one books.” Children outgrow this. Bilingual children may also mix multiple languages into one sentence, especially when they know that the person they’re speaking to knows both languages. When they’re speaking to a mono-lingual person, they’re more likely to stay in one language.

Bilingual children may seem to know fewer words, and be slower in language development (perhaps 3 – 6 months behind peers in either language). However, if you add together the words they know in both languages, the total is almost always higher than it is for those who speak one language.

If you’re worried, here are a few red flags to watch out for: less than one new word per week (in either language) for 9 – 15 month old children; less than 20 words (in two languages combined) by 20 months; no word combinations (like ‘red ball’ or ‘give cookie’ or ‘see doggie’) by age 2 – 3 years.

Are there benefits to learning two languages early on?

Early childhood is the easiest time to learn multiple languages. Speaking the language of his heritage can help connect him to that history, and to his extended family. Knowing multiple languages can help your child in school and in her future career in our increasingly global society.

Multilingual children have been shown to be better at problem-solving – they are more flexible thinkers. They are also better at filtering out distractions and concentrating on the task at hand. Knowing multiple languages may help them feel at ease in different environments. Being aware of the need to adjust their language depending on whom they’re speaking to may increase empathy overall.

Want to learn more about language development and how to encourage it? Look here.

A Guide to Raising Bilingual Children.www.cnn.com/2012/11/28/living/parenting-bilingual-children/index.html