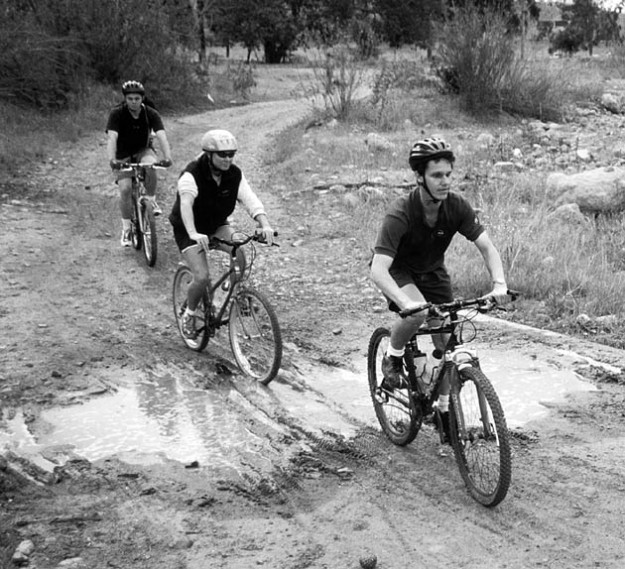 Daniel Kish, on his bike. From http://www.blesser.net/images/Blind%20Biker%20web.jpg

This post is about living up to expectations. Children… well, all human beings really… are good at doing what’s expected of them. But when the people around a child have limited expectations, they limit the possibilities for that child.

This week on the radio show This American Life, they had an episode called Batman. (Listen to it here. Or read the transcript.) They told the story of Daniel Kish, who has been blind since he was a toddler. The picture shows him – riding a bike. He navigates the world – hikes the woods, rides his bike, walks through cities – using echolocation. He clicks his tongue, and listens to how sound bounces back to determine what objects are nearby. This skill allows him to easily move about independently, with few limitations.

In the radio show, they interview author Robert Scott, who argues that blindness is a social construct. When we, as a society, have low expectations for what a blind person can accomplish, we limit what they can accomplish. He tells a story of a man who worked at a paint factory, then lost his vision. His co-workers told him: hey, we’d love for you to still work here. Go to an organization that serves the blind and get some training and come back. But the organization basically told him “blind people don’t do that” and offered him placement in a sheltered workshop for the blind. Robert Scott met him years later begging on a street. That’s what many people expect blind people to do.

This radio show was particularly striking to me because I have one leg. Technically, by just about any definition you can come up with, that makes me handicapped. But, I don’t really think of myself that way often. Certainly in my experience, handicaps are a social construct. I suppose I have to adapt things to do them, but truthfully, I rarely notice that I have to do anything differently than other people(other than finding a place to lean my crutches when I sit down). It doesn’t really limit my activities in any notable way. And I don’t see any reason why it should.

And yet… There’s a male amputee who hangs out on the 45th street on-ramp to I-5, asking for money, with his pant leg folded up to reveal his artificial leg and a sign saying he can’t work. There’s another one who hangs out by Bellevue Square. Same fashion choice. Same sign – “can’t work.” Here’s the thing. I seem to always see them as I’m driving to or from my work!

I just can’t understand why they think they can’t work. I have never had a problem finding a job. Now yes, I grasp that I came from a middle class background and went to a good college and grad school, and this helps in the job search. And I get that their job experience might be in fields that are harder to do with one leg. But what I don’t understand is their belief system. What is it that convinces them they can’t work?

Expectations. Handicaps as a social construct.

So how did I miss out on this societal message? I lost my leg to cancer when I was 15. I grew up in a military family in Wyoming which is a culture known for some fierce independence and a sincere desire never to be a burden to others. So, I had that influence going in to the experience. But also, after my amputation, I don’t remember ever really getting the message from anyone that I was now to be considered handicapped and incapable of an independent life. Now, maybe someone thought that about me along the way, but I never noticed if they did. It was just assumed, as far as I knew, that I would get healthy again, go back to high school, go on to college, go on to work, and marriage, and kids – all the same things that had been expected of me when I had two legs. There was no reason to change any of those expectations.

Since I’m a parent educator, and this is a blog about parenting, of course, I come around to thinking: And what lesson is there in all this for parents? And not just parents of kids with physical handicaps, but really for all parents.

I can’t just say “I expect my four year old to clean up his toys today” and then have that magically become reality. And I never set for my older ones a really specific expectation, like “I’ll only feel successful as  parent if she goes to Princeton and majors in physics.”

But I can tell you that over 21 years of parenting my eldest and 17 years with my second, that they have, in general lived up to our big picture expectations of them. They’re really good kids, with a strong ethical grounding, compassion for others, commitment to excellence and passion for learning.

We did have the broad expectation that they would do well in school, and go to college, and they have (well, my second child will start college next year…). “Research has shown that parental expectations for children’s academic achievement predict educational outcomes more than do other measures of parental involvement.” [Source]

I do think there’s a fine line with expectations. If we expect more of our kids than they are possibly capable of, and continually let them know that we’re disappointed at their failure to meet those expectations – well, that would be pretty miserable.

But we also don’t want to expect too little.

I confess – my oldest has done an excellent job of convincing us that she’s bad at washing dishes. So, we never ask her to do it. We just do it for her so it gets done “right.” But one does wonder how or when this pattern will ever change….

I think one of the things that limits what we ask of our kids is maybe a bit of parenting fatigue… it’s easier to do the dishes than ask her again to do them, or to show her again what we mean when we say clean…

But sometimes we try not to ask too much of our kids because we want to protect them. We want to protect them from the risk of failure.Yes, I told my children not to expect to be professional class or Olympics class athletes. Because I knew the statistical odds of them becoming that was really small, and I didn’t want them disappointed. But, did I also block any potential of them becoming that? Yeah, I did.

In the episode of This American Life, Daniel Kish tells this story… When Daniel was in fifth grade, he was a very independent kid – he walked to school, crossing major streets. He made his own breakfast and his own lunch. Then a new blind kid came to school. Adam. He was not independent – couldn’t do much of anything on his own. He had come from a school for the blind where people did everything for him – escorted him everywhere he went, carried his books, tied his shoes, made his lunch, brought it to him – because “blind kids can’t do those things.”

The people around Adam had done all those things for him to help him and to protect him from harm. On the episode, they interview Daniel Norris, who works for the Vermont Association for the Blind. He says that most parents of visually impaired kids have a hard time letting their kids risk trying things that “blind kids don’t do.”

Norris says “You can’t blame mom and dad for struggling and wanting to keep their child safe…They want their child to not suffer. And that’s very noble but holds the kids back.”

I try with my four-year-old to remain aware of developmental capabilities. What are reasonable things to expect of him? I try to expect that. And in the areas where he’s strongest, I stretch my expectations just a bit so he has to stretch just a bit. It’s in that pushing at the edge of his capabilities that he learns. But in the areas where he’s struggling a bit more, I try not to pressure him too much in the moment, while still holding the vision that someday he is going to get stronger in those areas too. In order for him to learn, I have to be willing to let him make mistakes, I have to let him sometimes fail so he learns how to get back up and try again. I have to be willing to let him take risks. I have to expect him to learn, change, grow, make reasonably smart choices, get a few bumps and bruises along the way, but be better for them in the long run. Because he’s likely to live up to those expectations.

On the radio show, host Lulu Miller says “And here’s where we get back to expectations. See, Daniel [Kish] thinks there is nothing amazing about him. He thinks that most blind people who don’t have other disabilities could do things like ride bikes. See, he thinks the reason that more blind people don’t [is] because the expectations that you or I are carrying around in our own heads about what blind people can do are simply way too low. Those expectations, those private thoughts in our heads, are extremely powerful things, because over time, they have the ability to change the blind person we are thinking about.”

2 thoughts on “Living Up to Expectations”